Scribbled with a smile by Najwa H. at 9:27 AM Labels: motherhood
The warning you get earlier on when it comes to being pregnant is BEWARE OF THE STRETCH MARKS KLSDFJLSJFLSJLFDKSLKA.

So the moment I found out I was pregnant I started shopping around for the goods.

Now, I am not the type to apply lotion religiously like some women who does it consistently after showers. Kudos to you guys who are that consistent. I just can't be bothered. Ask all my 90% body lotions at home that I barely touched yet bought because of peer pressure from people with baby soft skin,

So I started off slow by buying the spray version first: 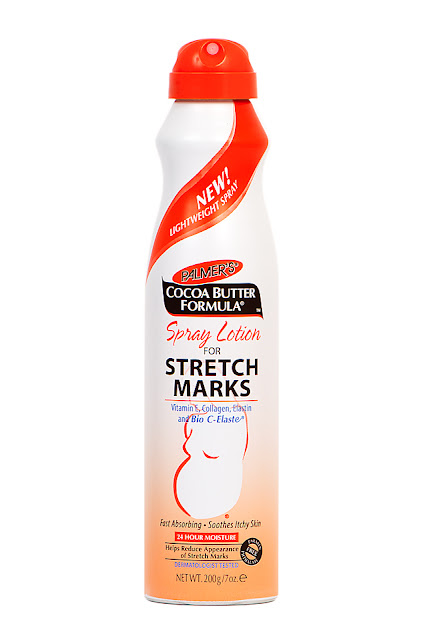 I loved this! But it does finishes up quite quickly since I tend to overspray myself a bit. LOL. It is such a time saving item as well; just spray it on, rub it in, tadaaaa! Less hassle, fast, smells awesome, yeah.

After that ran out, I purchased the Palmer's Tummy Butter next: 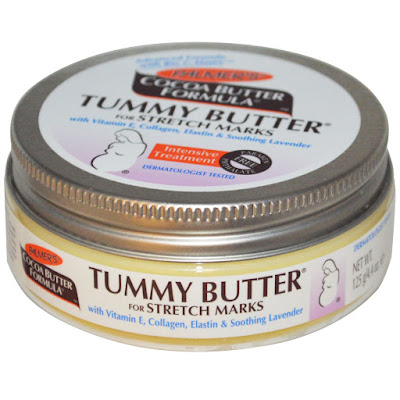 My friends were all into the creams and lotions, but I have never heard them mention the butter, so I got intrigued. The tummy butter has a balm consistency, so you really have to dig into the product if you are impatient in the mornings (like me). But it is super moisturising and I end up smelling like cocoa the whole day, so win.

However, I was starting to get impatient with the butter so I purchased the stretch marks lotion next: 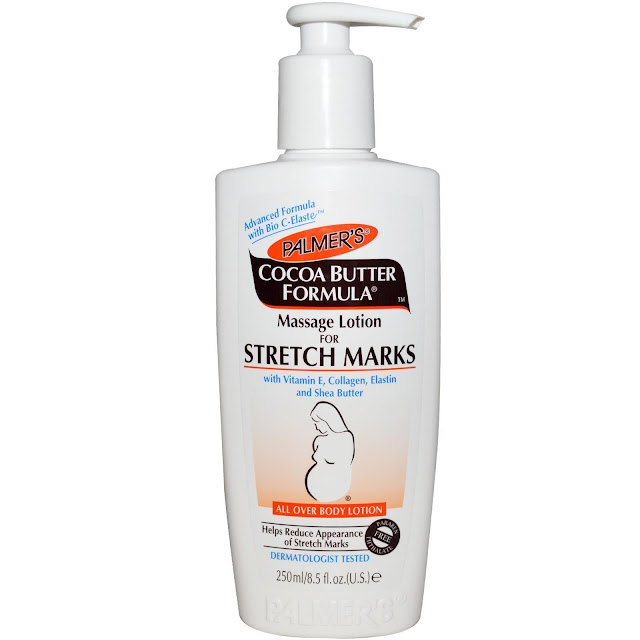 Oh can you tell I like smelling like cocoa butter? Helps me curb my cravings for chocolate a bit. DO NOT LICK THE LOTION OMG WTH.

So the pattern that I am doing now is: lotion in the morning, tummy butter in the evening. However friends have warned me earlier on that if your mother used to have stretch marks, then there is a high chance you will end up with stretch marks as well. So, pfft.

P/S: I heard they also have a range for baby products, but I can;t seemt o find them anywhere in my local Watsons and Guardians. Would love to have a chocolate smelling baby. XD But then again, I might end up biting the baby or nibbling the nose or something...

Scribbled with a smile by Najwa H. at 12:11 PM Labels: motherhood 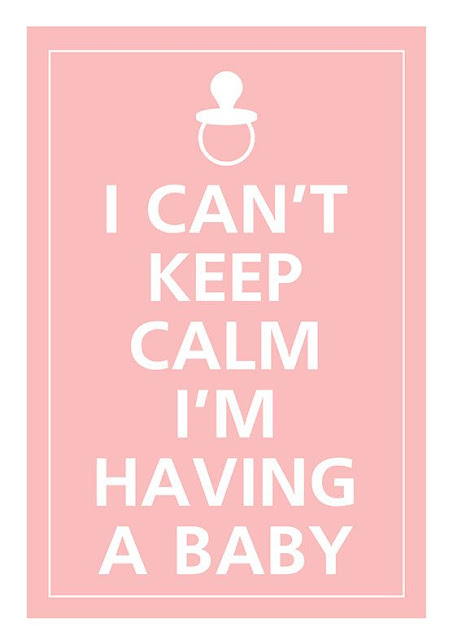 Alhamdulillah, After 4 years of trying, we were surprised by an appearance of a double line on a random pregnancy test I took last year at the beginning of November.

We have been trying for a while, with me taking a variety of vitamins and supposedly creams to help with fertility. I went through 3 cycles of clomids, each dose higher than the one before, until I was referred to the General Hospital to got through fertility treatment.

We went through blood tests, multiple vaginal scans (ouchhhhhhh) and also HSG scans (horrible experience here). And were left with the option to do a hysteroscopy. A hysteroscopy is a minor surgical procedure where they insert a camera through a small cut via your navel to check your fallopian tubes and whether there is any blockage. If there are, then they would clean it up to make way for the eggs to go through.

My hysteroscopy was scheduled to be in January as requested by me as I wanted to do it after the semester has ended.

So guess how surprised we were when we had a spontaneous conception after this while! I had beem buying my ovulation and pregnancy tests in bulk from a seller on Facebook who sells them really cheap. I had just finished my period and a day later decided to randomly take an ovulation test. It was really bright so we tried our luck anyway.

One week later, out of the blue I just randomly did another ovulation test. Be aware that ovulation test are supposed to be super bright only once between your periods so I was surprised to see it bright a gain just a week later. I decided to try out a pregnancy test just for the fun of it (with minimal expectation by the way).

And lo and behold, there was a suuuuuuper faint double line on my test. So faint that I was not sure about it myself. But I have NEVER had a double line, EVER. I was shocked, my husband who saw it was shocked. We nearly cried then and there. But we decided to wait it out a bit just to be extra sure.

Since that day, I started checking my morning pee every single morning, and the lines kept getting darker and darker. And we were getting surer by the day. On the fourth week we decided to do a scan and that's when I really cried.

There it was, the tiny bubble.

My obgyn confirmed I was pregnant and gave me all the necessary vitamins needed.

However a week later I experienced some bleeding which scared the crap out of me. I haven't told anyone at this point, not even my parents. I immediately rushed to my obgyn and had a scan. The bubble was still there, but my obgyn said to rest a lot and gave a medication to strengthen my uterus for the time being. The bleeding stopped after a few days, but i kept eating the medication for 3 weeks just to be cautious.

The eighth week was the most important scan ever. The heartbeat was the deciding factor whether the baby survived or not. It was a torturous 3 week period where I prayed and prayed so much hoping that the baby would be okay. And thankfully there it was, a faint flicker of the heartbeat. I cried again. Blame the hormones for all the crying.


Alhamdulillah, I am now in my sixth month of pregnancy (25th week and 5 days to be exact) and I couldn't be happier. I had minimal morning sickness and my husband has been ever so supportive of me throughout this journey. I really can't imagine not having him around. 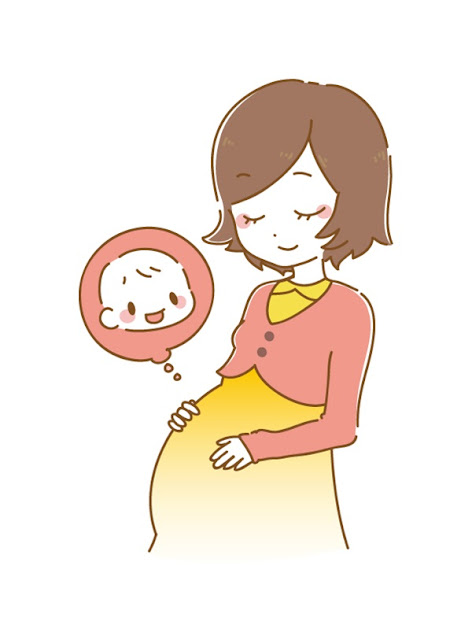 There is more to the journey of my pregnancy of course, but I will save that for future posts. Or else this blogpost will go on forever. :p

Scribbled with a smile by Najwa H. at 2:08 PM Labels: Fangirling, Randomisity
Kinda obsessed with this:


If there's any song that needs to go BIG now, it is definitely this one. SUPER OBSESSED.

Two years has passed by, and I didn't make time to fill out this dusty 'ol blog, despite being an avid stalker of everyone else's blogs.

Travelled much? It has been an eventful 2 years where I have travelled to Japan twice (I really need to blog about my travels so I can share my tips and tricks of the trade), went to Bandung, KL a few more times, etc.

How's marriage life so far you ask? I have been married for 4 years to the man I have known for 12 years now, and despite our ups and downs, I love him with all my heart.

Any plan for kids yet? We are trying, so please keep us in your prayers. It has been quite a stressful time when people keep asking about it, though I know it is out of kindness and curiosity. I think I feel the utmost stressed out is when my parents and in-laws are asked that question. My dad especially would love to have a kid around the house again. So it does break my heart a little bit every time I think about it.

But nevertheless, I am now under the care of a great gynaecologist after seeing several (and having lack of chemistry with), I finally feel that with her I might actually have a chance of getting preggers soon. So we will keep on trying! Ganbarimasu!!!

Hopefully happier news will be posted in this blog sooner or later.

Scribbled with a smile by Najwa H. at 10:07 AM Labels: Family, My Other Half, Syawal


Had a blast! Ate a lot! Drank a lot! Avoided "when are you getting preggy?" questions a lot! 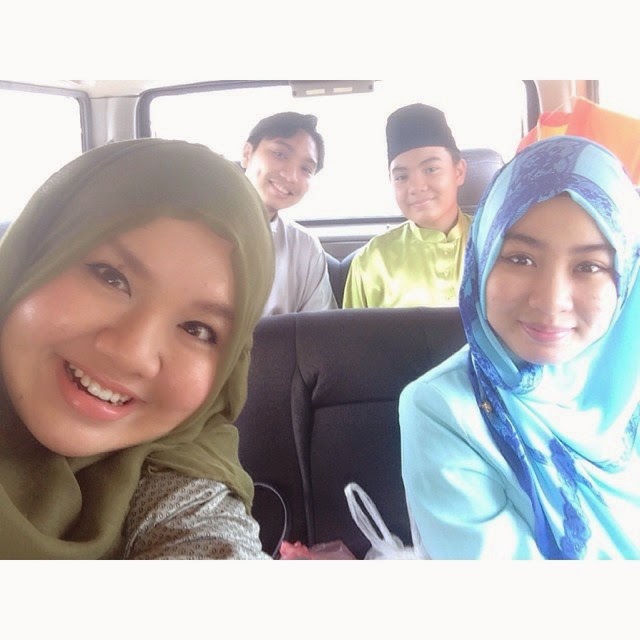 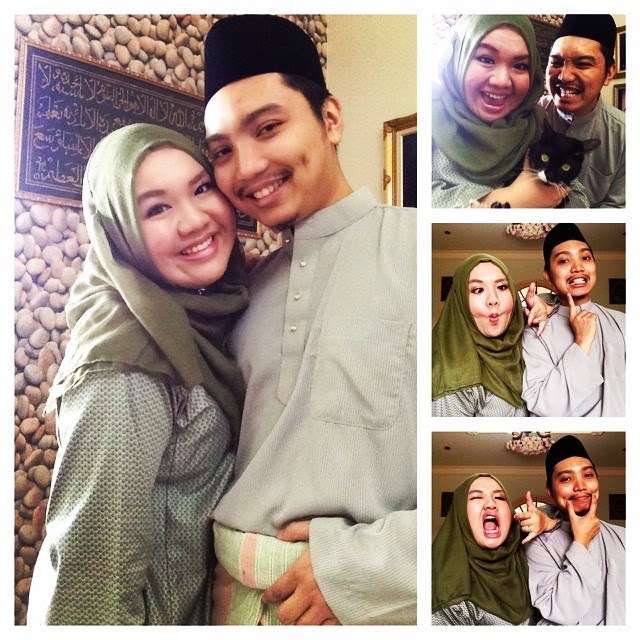 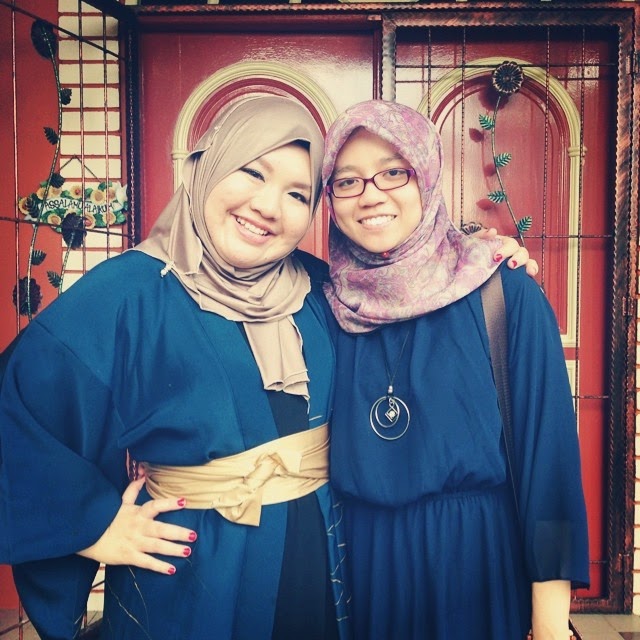 BFF came for second house raya. Which is rare because being a doctor, she is not always around during Raya. And to think next week she is being posted in Saratok! :( Gotta find someone else to go on a sushi binge. 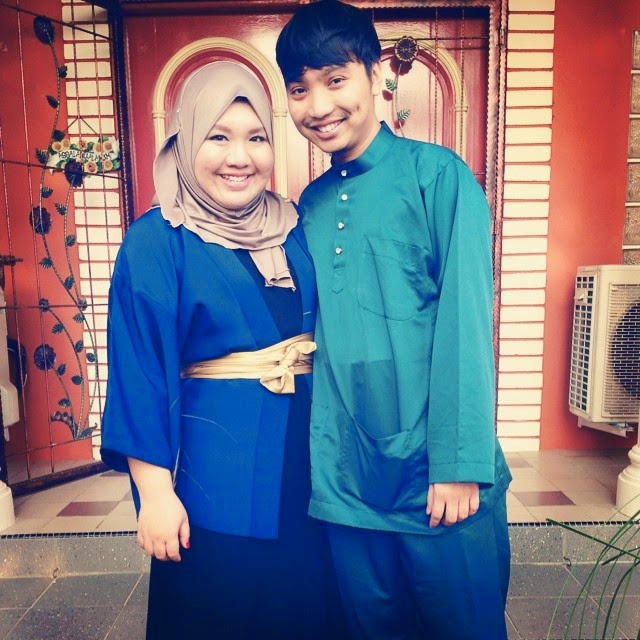 Couldn't decide what to wear so I wore a black maxi dress with a male kimono top tied with a gold obi-like waist ribbon. 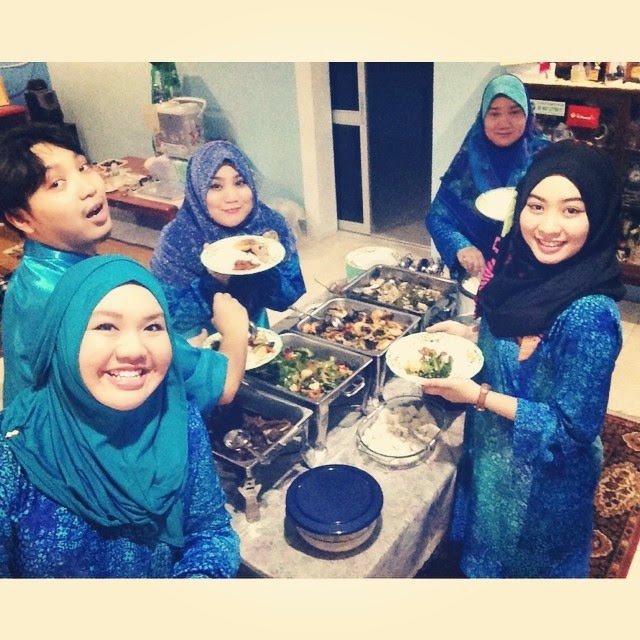 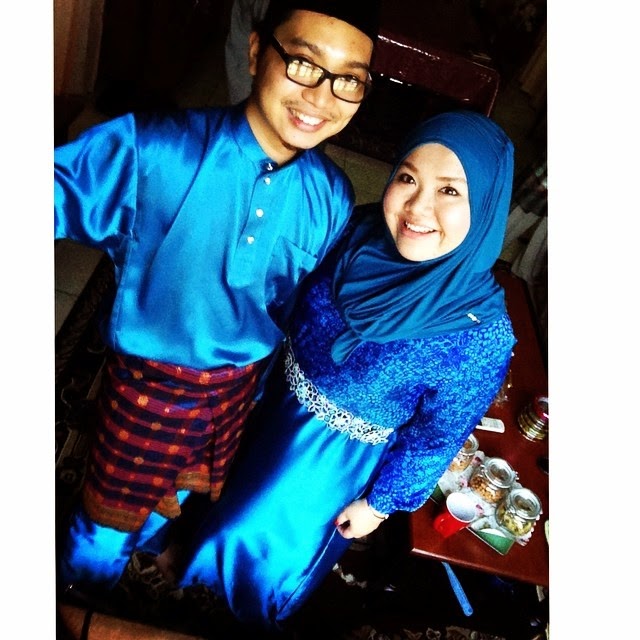 Wore my instant shawl from luvhijab.com for the first time. Have a love-hate relationship with it really. XD 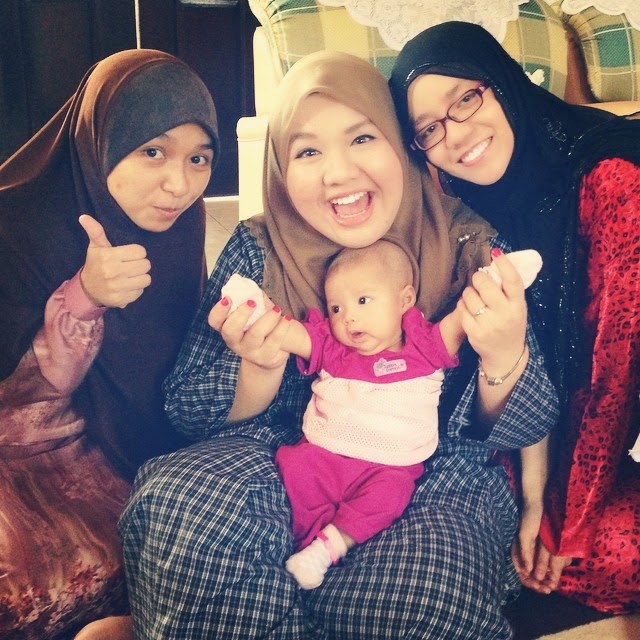 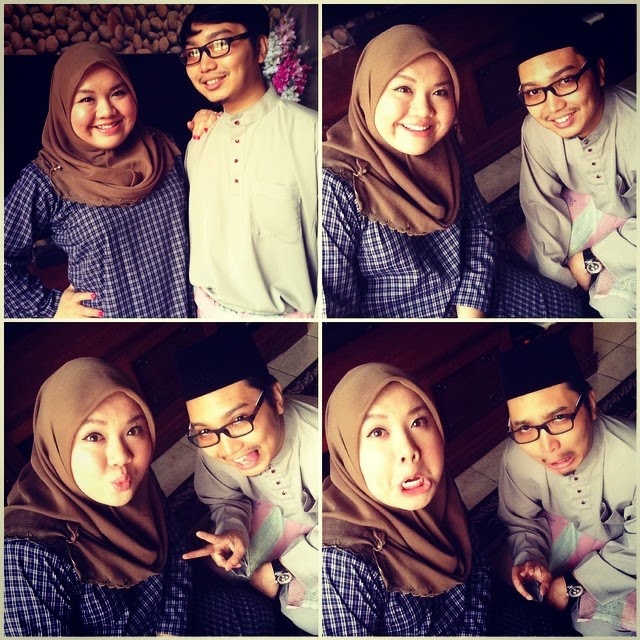 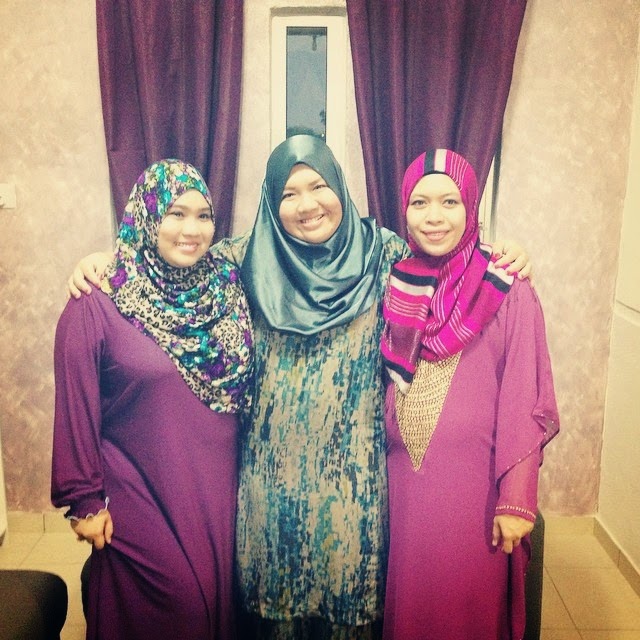 Went to visit pregnant EVA with sister in law with hopes that her pregnancy is contagious. Wish me luck guys! And lots of prayers for us too! :3 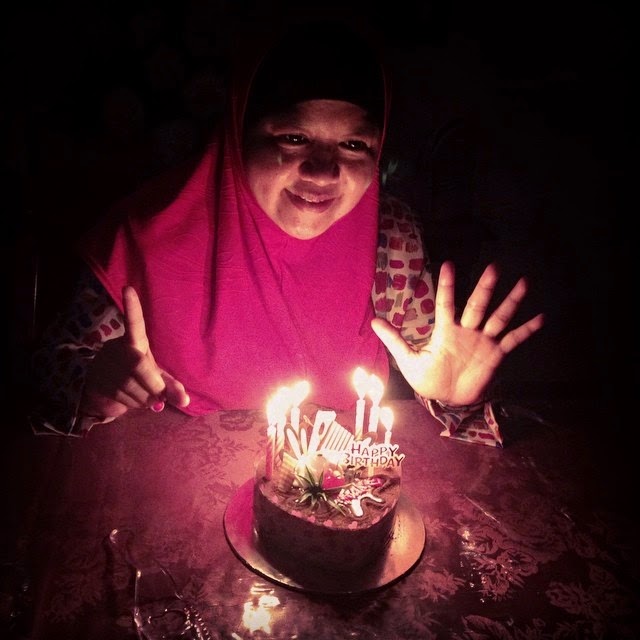 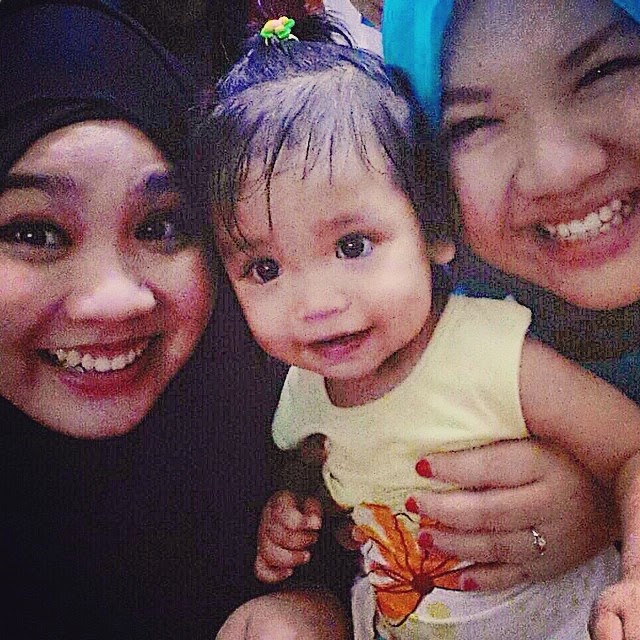 With adorable Alisya who got excited seeing herself in the phone's front camera. 8D 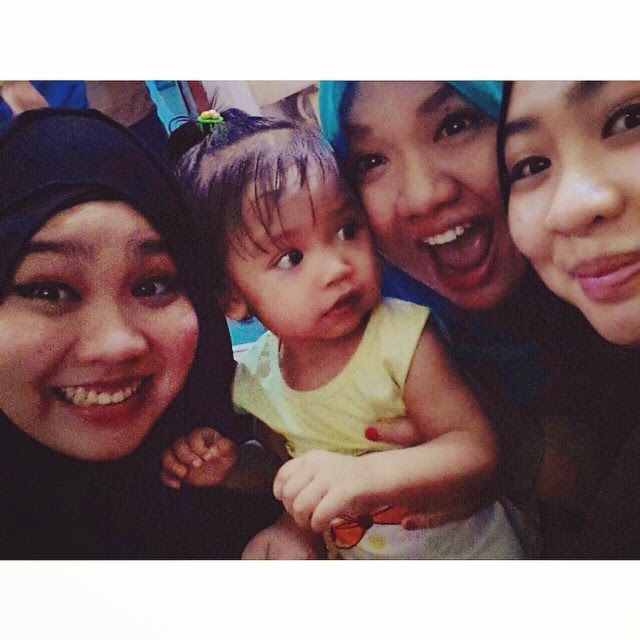 Not so excited when my younger sister in law joined in the photo. "WAIT. WHO DAT?" D8 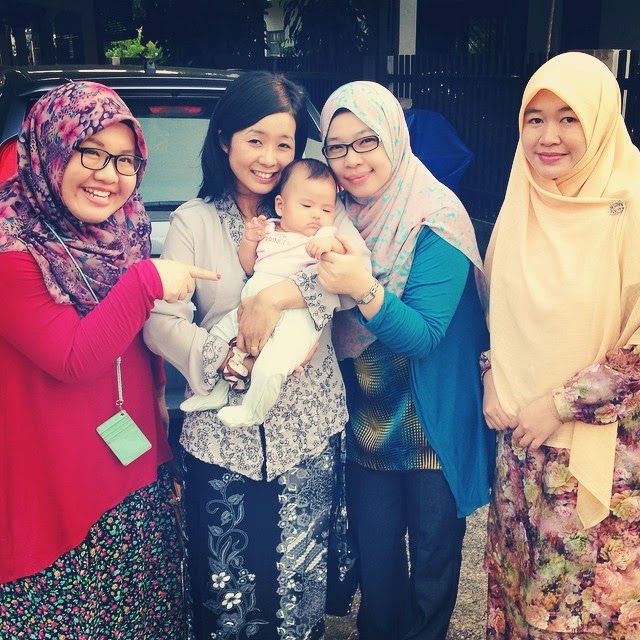 Visited Iyori-chan and bid farewell to our work colleague and my fellow Japanese Language Teacher, Mayu Sensei. Iyori-chan, Y U SO GRUMPY. Haha!

Stuff That You Ought to Know About Too... :p

Lord of the Blog

Najwa H.
I love comedy, jokes and good companionship. The world needs to laugh more and smile at the petty things. Where has everyone's sense of humour disappear off to?

How Old is My Bwog?